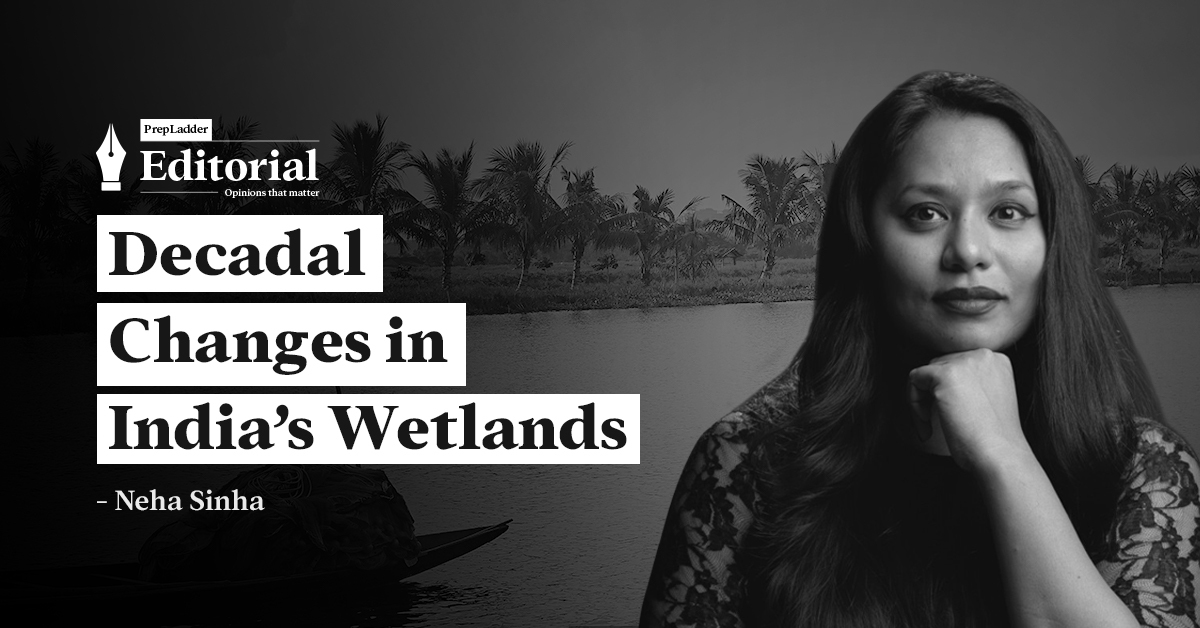 India is often described as a mega biodiverse nation with an abundance of rivers, streams, water and forests. While we have an incredible percentage of the world’s biodiversity, we also have a responsibility to ensure we protect this wealth. Wetlands are considered the world’s most productive ecosystem – they give us food, sequester carbon, help in flood control, recharge groundwater, and vegetation that grows in wetlands is consumed in various ways – to build mats, houses, as wildlife refuge, and as food. Conserving wetlands is part of climate adaptation and mitigation both.

Yet, wetlands are amongst the world’s most threatened ecosystems.

The Government has now come out with a ‘National wetland decadal change atlas’ which maps changes in Indian wetlands. Executed by Space Applications Centre, Indian Space Research Organisation Ahmedabad, Gujarat, this Atlas builds on a previous wetland atlas by ISRO. It locates changes to wetlands as well as wetland extent now. In a fast-growing country, such exercises are important to understand changes in land use, and also to plan conservation and climate actions.

Indian Wetlands Today – The Good and The Bad

The salient features of Indian wetlands, as per the atlas are below.

Rivers: The major wetland types in terms of area coverage are river/stream, reservoir, intertidal mudflat and tank/pond. Among the wetland types, more than one-third of the total wetland area is covered by rivers (35.2%), another around 43% wetland area is covered by combining reservoirs (17.1%), and intertidal mudflat (14.4%) and tank/ponds (11.4%). The most important thing to note here is that rivers are not covered by the present Wetland Rules, 2017. As such, there is no conservation or ecology-based Act or law for rivers in India. A majority of our water bodies are in the shape of rivers – and ironically, they are not recognised in Wetland Rules. Exceptions are sometimes made for Ramsar sites (sites of global importance) which may include a river portion and its wetland. But we have less than 50 Ramsar sites, and they do not cater to the conservation needs of rivers. If there is a need to manage a river for its conservation, there is no law to do so.

Man-made wetlands: man-made wetlands are created for the needs of irrigation, water supply, electricity, fisheries, aquaculture, and flood control, etc. These may include tank/ponds, check dams, ash ponds/cooling ponds near thermal plants or abandoned mining areas. After updation of the wetlands inventory of 2006-07, wetland number and area is revised to 2,12,385 from the original figure of 2,01,503). A majority of this increase is attributed to inland man-made (81.5%) and coastal man-made (17%) categories which include reservoirs, aquaculture ponds and more. While man-made wetlands are extremely important, they are primarily managed for one particular use and may not always be allowed to become wildlife refuges or centres of biodiversity. For example, aquaculture ponds are only to raise a particular fish or prawns. Worryingly, natural wetlands are often converted into man-made wetlands also.

Loss of wetlands and intertidal areas: the atlas finds that 1,342 wetlands which were existing earlier, covering an area of 0.025 Mha, disappeared in 2017-18. The major negative change in wetland areas was observed for intertidal mudflat (-4.8%), salt marsh (-3.7%) and ‘waterlogged’ areas(-2.4%). There is a decrease in coastal natural wetlands which have been converted to coastal man-made categories with major changes occurring at intertidal mudflats, converted to Salt pans in Rann of Kachchh.

In a recent order in the matter of Paryavarana Parirakshana Sangham vs Union of India, the National Green Tribunal has observed:

“Even if the wetlands identified and mapped were not to be included as wetlands, then they will have to be treated as water bodies and steps will have to be taken to protect the same as has been observed by the Hon’ble Apex Court in M.K. Balakrishnan’s case cited supra and remove encroachments and restrain any activity in the wetland or water body, as it is necessary to protect the water bodies also as equal to wetlands, as they also play a great role in the sustainability of the environment and provide valuable ecosystem services.”

The NGT called for the protection of the Sompeta wetland in Andhra Pradesh through this order. It also highlighted a 2017 order of the Supreme Court (M.K. Balakrishnan case) which says that wetlands that were identified in the ISRO wetland atlas must be treated as water bodies.

This is important because currently, the Wetland Rules 2017 only apply to those wetlands that are identified as such by the state government. However, the orders of the Supreme Court and National Green Tribunal go one step ahead and instruct that a much wider view must be taken to conserve or manage India’s wetlands. This also shows the importance of satellite studies and imagery in assessing India’s natural wealth—this use of technology along with ground action can lay the roadmap for much more robust conservation and climate roadmaps.