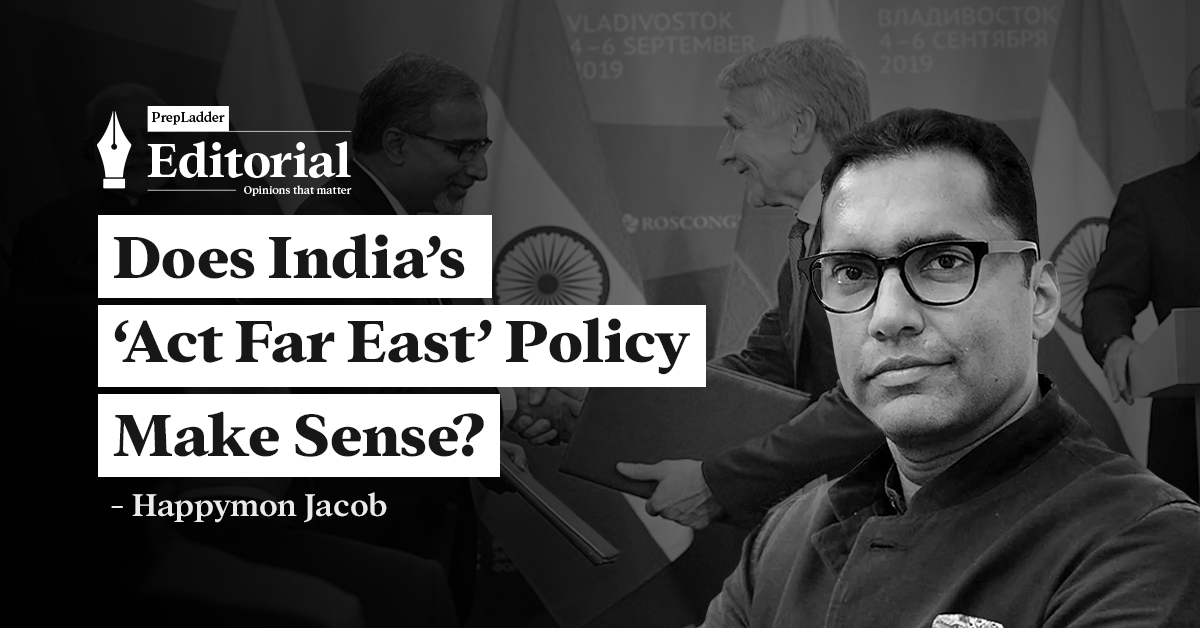 The proposed Chennai-Vladivostok maritime route that will go through the Straits of Malacca and the South China Sea, covering ports in Malaysia, Philippines and South Korea to Russia’s far east appears to be an emerging new plank in New Delhi’s Indo-Pacific strategy. Futuristic and interesting, it is not without its challenges.

In September 2019 at the Eastern Economic Forum (EEF), Prime Minister Modi unveiled what eventually came to be called as India’s “Act Far East” policy which aimed to boost the country’s engagement with Russia’s Far East region. Inaugurated in 2015, EEF picked pace over the years with participation from countries such as Japan, China, Mongolia and South Korea – and now India. While the ‘Act Far East’ policy could provide a coherent strategy for India’s engagement of the Russian Far East, India’s engagement of the region is hardly new. India opened a consulate in Vladivostok in 1992 and since then, it has been making modest investments in the region’s gas and oil reserves. For instance, in 2001, Oil and Natural Gas Corporation acquired a 20 percent stake in the Sakhalin oil project.

Is India’s “Act Far East” policy merely about enhancing India-Russia economic cooperation in a remote corner of Russia or is there more to it?

Just as India’s ‘Act East policy’ is not without its strategic undertones, New Delhi’s ‘Act Far-East’ policy too has its strategic implications. Consider this. Russia’s Far-East lies at the intersection of Asia-Pacific region and, perhaps more significantly, the proposed Chennai-Vladivostok corridor passes through the South China Sea. To be more specific, once completed, the Chennai-Vladivostok maritime corridor will link ports of Chennai, Visakhapatnam and Kolkata with ports in Vladivostok, Vostochny and Olga in Russia’s east coast. Put differently, the growing Indian involvement in the Russian Far East, and the Chennai-Vladivostok corridor, if they indeed become fructify, take India right into the heart of the Chinese sphere of influence. India’s ‘Act Far-East’ policy could potentially help Russia, Japan and itself to enhance trade and connectivity as well as balance, to the extent possible, China’s overbearance in the region.

While Indian plans would definitely not counter China’s far more ambitious and resourceful Belt and Road Initiative (BRI)  project, India’s initiatives have come at a time when the BRI is facing resistance from the US in particular and the West in general. More so, Russia is also aware of the pitfalls of overdependence on China especially in its Far East. In short, there is a growing wariness about BRI and the Chinese designs behind it.

This growing wariness about Chinese proclivity to put overwhelming political and military pressure on less powerful states could potentially make more states open towards working with India in the region, if India is able to capitalise on such sentiments. Russia too seems keen on playing ball. The 2019 India-Russia joint statement, for instance, agreed to “intensify consultations on complementarities between integration and development initiatives in greater Eurasian space and in the regions of Indian and Pacific Oceans”.

Siachen Demilitarisation Is Desirable But Difficult

India, Russia and the Indo-Pacific

Russia has been critical of the Indo-Pacific concept and the QUAD; it prefers to operate with pre-existing geopolitical concepts such as Asia-pacific and Eurasia. But that shouldn’t matter if India is indeed keen on working with Russia in either of these two geopolitical spaces. Indian and Russian interests in the Indo-Pacific and Asia-Pacific could eventually overlap once Moscow’s relations with Japan and US improve, if and when they do, and Russia starts feeling China’s overbearance. The latter is a matter of time.

By focusing on Russia’s Far East, India can, albeit modestly, position itself in the larger geopolitics of the region including the South China sea. This could eventually give it more space for manoeuvre in the Indo-Pacific. Russia too will find in India a useful counter-balance to China, when the time comes. More so, if India cooperates with Russia in the Far East and in the ‘Asia Pacific’ region, China may not be as critical of such Indian engagement as it currently is of Indo-US cooperation in the Indo-Pacific.

That Japan is also keen to be part of this mix with India and Russia is also significant given Tokyo’s past (much less today) difficulties with Moscow and its continuing problems with Beijing. It is in this context that India’s coordination with Japan in Russia’s Far East becomes geopolitically significant.

In that sense, engaging Russia in the Far East has two potential implications: one, it would improve India’s presence in the South China Sea as a legitimate power, and because it would be partly in partnership with Russia, China would find it hard to be vehemently critical of such a move; and, two, by engaging Russia in the Asia Pacific, along with Japan and other like-minded countries, New Delhi may be able to reduce the extent of Moscow’s current opposition to the concept of the Indo-Pacific. Put differently, New Delhi should engage Russia in the South China Sea to moderate Beijing’s opposition to the Indian engagement of the region, and engage it in the larger Indo-Pacific region to moderate its opposition to the Indo-Pacific construct.

In sum, I would say that India’s Act Far East policy is a good strategic move, and if (a big ‘if’) New Delhi is able to walk the talk on it, it will have long term positive implications for India’s maritime policy.