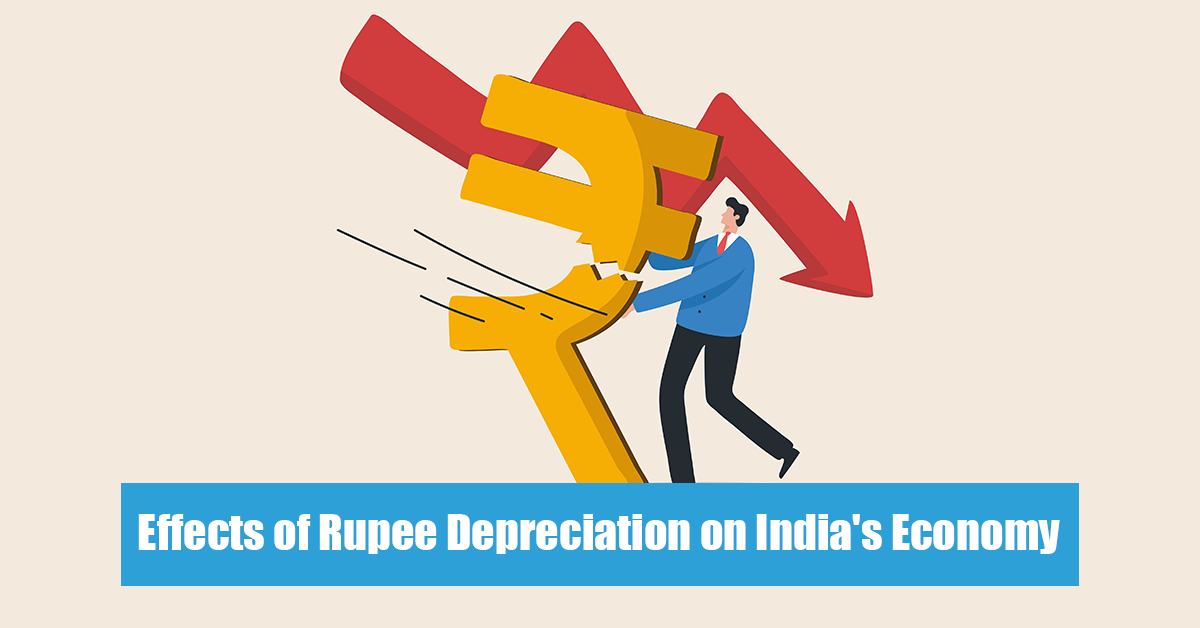 Today’s edition of our Current Affairs will comprise a discussion on Effects of Rupee Depreciation on Indian Economy. Read further to upgrade your UPSC CSE knowledge and also understand the topic’s relevance to the UPSC syllabus.

Recently, the Indian rupee breached the psychologically significant exchange rate level of 80 to a US dollar in early trade.

About the Rupee Exchange Rate

Causes of Depreciation of Rupee and Depletion of Forex Reserves

● Consistently higher domestic price inflation in India: Since prices are rising in the domestic
market, more money has to be spent for the same thing which was cheaper earlier.
● The Federal Reserve of the US has been raising its benchmark interest rate because of
which the investors, who are seeking higher returns, pull capital away from emerging
markets such as India and back into the US.
● India’s imports are growing more than the growth in exports. India’s import demand amid
rising global oil prices are negatively affecting the rupee.
● All the above reasons have reduced the demand of Rupee in the international market.
● India’s current account deficit is expected to hit a 10-year high of 3.3% of gross domestic
product in the current financial year. It implies that India is sending more money outside
than it is receiving from foreign countries.

Read yesterday’s edition of current affairs on FCRA and the law related to NGO Funding, in case you missed reading it.

Adverse Impact of the Weaker Rupee

India is fine as of now, but trends suggest things are getting worse. For instance Forex reserves have
fallen and the rupee’s exchange rate with the dollar has fallen.
● Earlier, for import of $1 worth of imports importers had to pay (say) 76 rupees, now they
have to pay 80 rupees for the same amount of imports.

● Since a large proportion of India’s imports are dollar-denominated, these imports will get
costlier, for example, the crude oil import bill.
● Costlier imports, in turn, will widen the trade deficit as well as the current account, which
will put pressure on the exchange rate.
● In exports which happen via the dollar, generally speaking, exporters will receive 80 rupees
for each dollar worth of exports as against 76 rupees (say) for the same amount of exports.
● Since the rupee is not the only currency weakening against the dollar, the net effect will
depend on how much has the other currency lost to the dollar.
● Under normal circumstances, rupee depreciation is good for the current account deficit
because it leads to higher exports.
● But currently, India is already facing high inflation and continued depreciation may be
making matters worse.
● A weakening rupee hurts foreign investors, who came looking for a good return, as well as
Indians, who have loans abroad.

● The RBI (which is in charge of monetary policy) should focus on containing inflation, as it is
legally mandated to do, and the government (which is in charge of the fiscal policy) should
contain its borrowings.
● Higher borrowings (fiscal deficit) by the government eats up domestic savings and forces
the rest of the economic agents to borrow from abroad.
● Policymakers (both in the government and the RBI) have to choose what their priority is:
containing inflation or being hung up on exchange rate and forex levels.
● It is neither wise nor possible for the RBI to prevent the rupee from falling indefinitely.
● Defending the rupee will simply result in India exhausting its forex reserves over time
because global investors have much bigger financial clout.
● Most analysts believe that the better strategy is to let the rupee depreciate and act as a
natural shock absorber to the adverse terms of trade.

Enhance your UPSC CSE preparation with a related video on Foreign Investment by Vivek Singh Sir, our Economy faculty:

Exchange Rates: An exchange rate is the value of one nation’s currency versus the currency of
another nation or economic zone. For example, how many Rupees does it take to buy one US
Dollar?

A fixed, or Pegged Rate

● Exchange Rate in India: With the LPG reforms of 1991, India gradually adopted a floating
exchange rate.

Practice Question: Within a short span of time, the rupee has seen an unprecedented fall in its value against the Dollar in the global market economy. What are the causes and consequences of such depreciation? Suggest some measures to contain the same.