Freedom of Religion and Attire 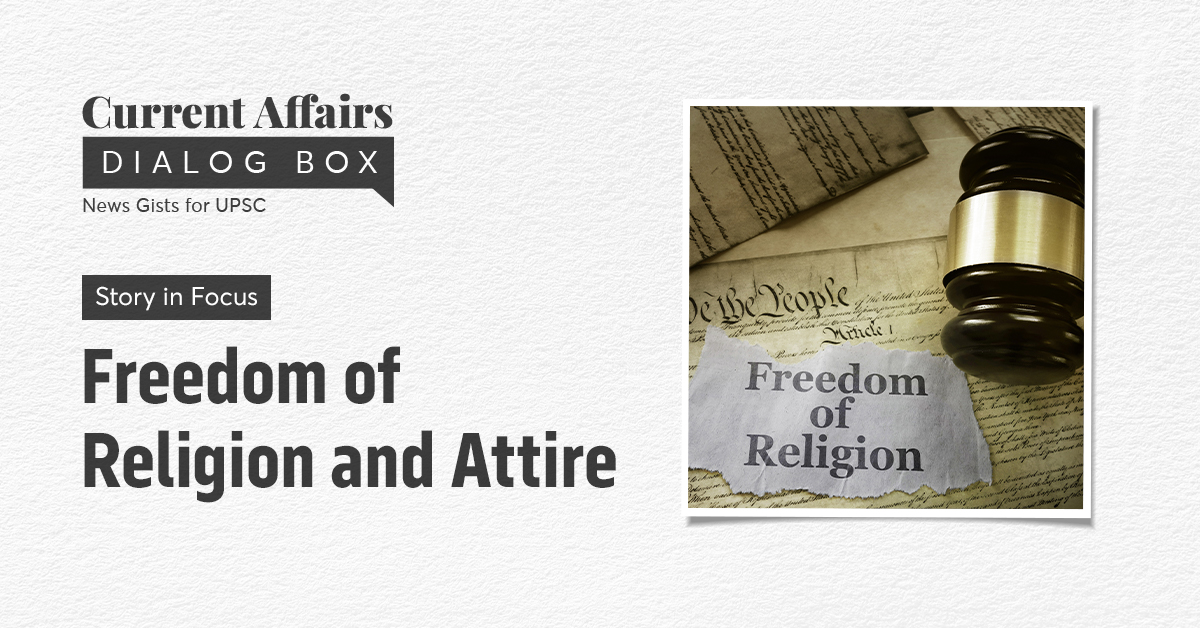 Recently, a Karnataka school has denied the entry of students wearing hijab. This throws the spotlight on freedom of religion.

● The State government has invoked provisions of the Karnataka Education Act,1983 and directed colleges to ensure that “clothes which disturb equality, integrity and public law should not be worn”.

Judiciary acts as a bulwark against the encroachment of Fundamental Rights. Analyze

Freedom of Religion under the Indian Constitution:

● Article 19(1)(a): It guarantees the right to freedom of speech and expression.

○ Constitutionally, a right under Article 19(1)(a) can only be limited to the “reasonable restrictions” mentioned in Article 19(2).

○ This includes sovereignty and integrity of India, friendly relations with foreign states, public order, decency or morality or in relation to contempt of courts, defamation or incitement to an offence.

Freedom of Religion is further explained in detail in Article 25 (1) of the Indian Constitution.

● Article 25 (1): “Freedom of Conscience and the Right freely to Profess, Practice and Propagate Religion” is guaranteed under this Article.

○ It is a right that guarantees negative liberty, which means that the state shall ensure that there is no interference or obstacle to exercise this freedom.

○ However, like all fundamental rights, the state can restrict the right for grounds of public order, decency, morality, health and other state interests.

Also read: How to Prepare Indian Polity for UPSC Prelims?

Supreme Court on Freedom of Religion:

● Over the years, the Supreme Court has evolved a practical test of sorts to determine what religious practices can be constitutionally protected and what can be ignored.

● In 1954, the Supreme Court held in the Shirur Mutt case that the term “religion” will cover all rituals and practices “integral” to a religion.

● The test to determine what is integral is termed as the “essential religious practices” test.

● The Supreme Court (in Shirur Mutt Case) stated that “in the first place, what constitutes the essential part of a religion is primarily to be ascertained with reference to the doctrines of that religion itself”.

● While these issues are largely understood to be community-based, there are instances in which the court has applied the test to individual freedoms as well.

○ Community-Based Test: In a 2004 ruling, the Supreme Court held that the Ananda MargaSect had no fundamental right to perform Tandava dance in public streets, since it did not constitute an essential religious practice of the sect.

○ Individual Freedom Test: In 2016, a three-judge Bench of the Supreme Court upheld the discharge of a Muslim airman from the Indian Air Force for keeping a beard.

Ø The court distinguished the case of a Muslim airman from that of Sikhs who are allowed to keep a beard.

Ø The court essentially held that keeping a beard is not an essential part of Islamic practices.

Get a basic understanding of the Indian Constitution in this detailed video by M.Puri Sir, one of the educators of our DREAM TEAM:

● Several experts have criticized it because it pushes the court to delve into theological spaces.

● Scholars agree that it is better for the court to prohibit religious practices for public order rather than determine what is essential to a religion that it needs to be protected.

How have the Courts ruled so far on the issue of Hijab?

● In Amna Bint Basheer Vs Central Board of Secondary Education (2016): The Kerala High Court held that the practice of wearing a hijab constitutes an essential religious practice but did not quash the dress code prescribed by CBSE.

○ It rather provided additional safeguards, such as examining students wearing full sleeves when needed.

Fathima Tasneem Vs State of Kerala, 2018:

○ A writ petition had been filed by Muhammad Sunir, the father of two girls aged 12 and 8.

○ The petitioner challenged the school’s denial of permission to wear full-sleeved shirts and a headscarf as it was against the prescribed dress code.

○ Kerala HC ruled in favour of the school and said that the “collective rights” of an institution would be given primacy over the individual rights of the petitioner.

○ A minor student challenged the school’s prescribed dress code that did not allow the wearing of a headscarf.

○ The Bombay High Court ruled against her, despite the argument that wearing a headscarf is an essential religious practice that must be protected under the Constitution

○ The High Court referred to relevant verses from the Quran and held that the book did not prescribe wearing of a headscarf before other women.

● Courts have ruled several times on the rights of an individual, the rights of a community and the freedom of choice. It is up to the courts again to step in and draw the line.

● Further, the Karnataka High Court has referred the hearing petitions challenging the hijab ban in certain colleges in the State to a larger bench.

Excel in your UPSC CSE preparation and learn with the DREAM TEAM on the PrepLadder app. Get access to well-structured and the most comprehensive study material to crack the IAS exam.