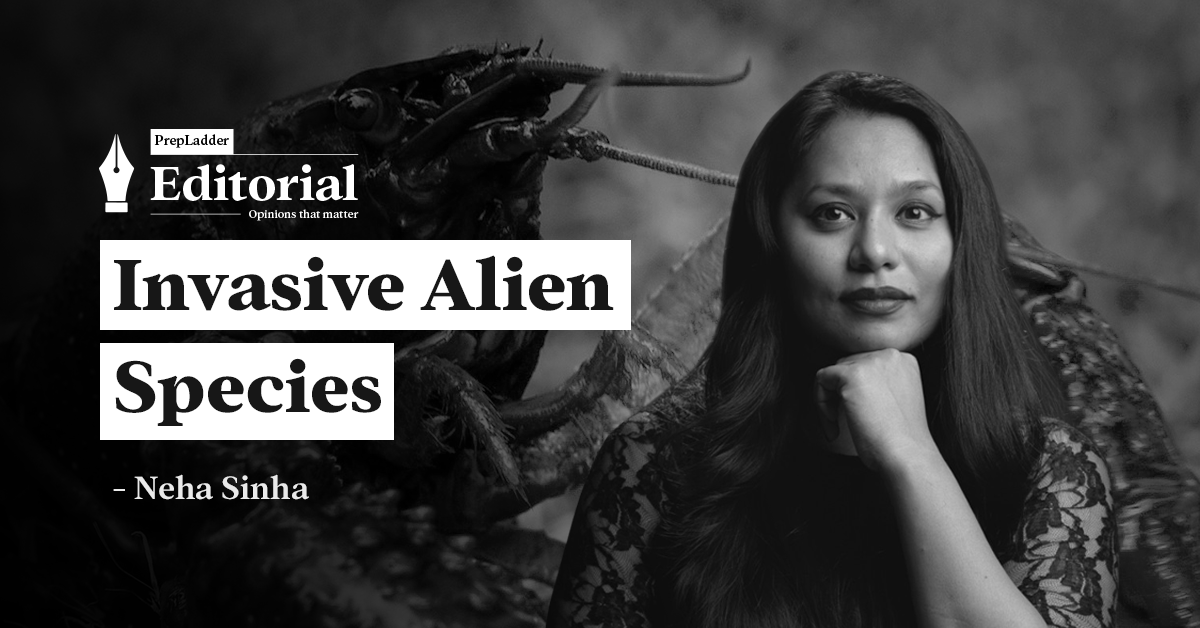 When we talk about threats to our society and economy, we usually think of war, terrorism or disease. What doesn’t usually come to mind are ecological threats. For example, think of the Delhi Ridge, or large parts of the highways in Rajasthan. They are covered by a single tree – the Prosopis Juliflora or Vilayati Kikar. Why is there only one tree there? Or think of the lantana, a thorny bush with colourful flowers that grow in clusters, growing all over forests in India. Is it normal to see one single bush spread over kilometres of land? In several wetlands, you may see a plant covering the entire expanse of water, like a green mat. This is the invasive water hyacinth plant.

All these plants are Invasive Alien Species (IAS). IAS are a huge threat to our country and ecosystems. Species of plants, animals, pathogens and cultivars that are not native to our ecosystems within India, and harm us adversely are Invasive Alien Species (IAS). In simple terms, these are species that have no natural ‘enemies’ because they are from other ecosystems. As a result, they spread fast and they do not allow other species to proliferate. An IAS predator for example (such as a rat on an island) may dominate other predators, and change the entire structure and composition of the ecosystem. They also cause huge economic damage, by disallowing crops or other plants to grow, and by reducing the ecosystem services of natural ecosystems like forests.

A Law For Invasive Alien Species In India

The Bill introduces ‘Alien Invasive Species’ with the scope of the Wildlife Protection Act. Under Section 62 A (i) The Central Government has the power to regulate or prohibit the import, trade, possession or proliferation of invasive alien species which pose a threat to the wildlife or habitat in India. The Bill says:

‘(16A) “invasive alien species” means a species of animal or plant which is not native to India and whose introduction or spread may threaten or adversely impact wildlife or its habitat;’;

While this is a positive development, this definition of Invasive Alien Species is not complete. There are two aspects to be kept in mind:

Invasive alien species are plants, animals, pathogens and other organisms that are non-native to an ecosystem, and which may cause economic or environmental harm or adversely affect human health. In particular, they impact adversely upon biodiversity, including the decline or elimination of native species – through competition, predation, or transmission of pathogens – and the disruption of local ecosystems and ecosystem functions.

Many studies have found that climate change is worsening the impacts of Invasive Alien Species. A 2019 report by the United Nations-led Intergovernmental Science-Policy Platform for Biodiversity and Ecosystem Services (IPBES) says that IAS are increasing with climate change. The rate of introduction of new IAS is also higher than ever before. Many times, Invasive Alien Species is introduced unknowingly by people- through ships, flights, cargo transportation etc. Pests can move between countries through luggage and clothing.

The Millennium Development Goals seeks to tackle Invasive Alien Species. one part of goal 15 is dedicated to: ‘Prevent introduction and reduce impact of invasive alien species.’

With places becoming hotter or more storm-prone because of climate change, the niche for Invasive Alien Species is increasing.

Removal of Invasive Alien Species is both a scientific and administrative challenge – but this challenge can be met sensitively, and also create employment on the way.