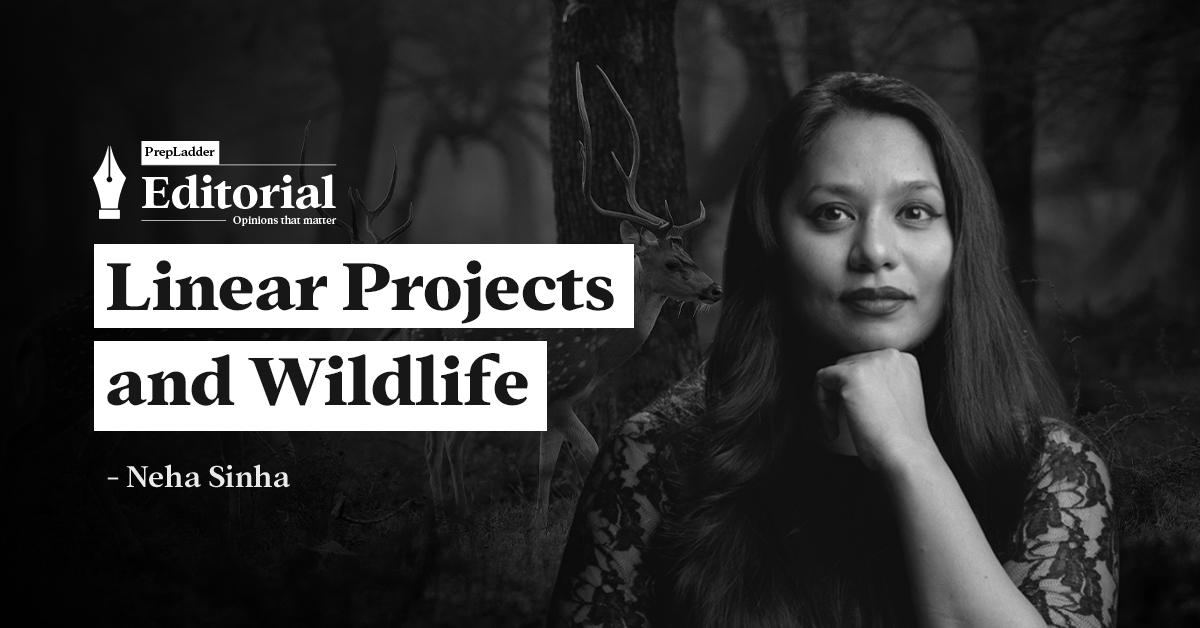 In March,  a young tiger was killed on National Highway 44 near Pench tiger reserve. The first question that anyone will ask is: how did the tiger get to the highway, and aren’t highways made for cars?

The answer to this lies in a new scholarship that is coming up on land use, mobility and right of way. There is increasing research on mobility in cities, peri-urban and other areas. The inference is that we need to plan areas that go beyond serving cars or other fast, motorized vehicles – that is,  to also plan for non-motorised use of roads and highways. There should be safe crossings for both people and animals with regard to any project that impacts landscapes for long stretches- like railway lines and roads.

Projects laid in a straight line, such as railway lines, roads, electric lines, and canals, are called ‘linear projects’.

This is made much more urgent as we are continuously losing wildlife to roads and railways.

Between 2015-19, 62 elephants died after being hit by trains. Railway collisions are the second biggest reason for the unnatural deaths of elephants in India at present. Twenty-six tigers have died across the country between January 2010 and January 2021 in road and rail accidents. Of them, 12 tigers have lost their lives in road accidents and 14 in rail accidents.

The Environment Ministry has recently announced a permanent coordination body that will work with the Railways ministry and the environment ministry to prevent the death of elephants on railway tracks.

There are provisions in the Wildlife (Protection) Act 1974 which stress on protecting animal corridors from harm. Section 38V. (3)b of the Wildlife Protection Act says:

“ecologically compatible land uses in the tiger reserves and areas linking one protected area or tiger reserve with another for addressing the livelihood concerns of local people, so as to provide dispersal habitats and corridor for spill overpopulation of wild animals from the designated core areas of tiger reserves or from tiger breeding habitats within other protected areas.”

However, it is also important to examine certain suggested policy changes that are proposed by the government.

In 2021, the Environment Ministry circulated a paper that suggested changes to the Forest Conservation Act, 1980. The portions relevant to linear projects and forests/wildlife are as follows:

1. Right of Way: the proposal is for “Right of Way for PWD, NHAI, Railways or other agencies and exemption of land acquired before 25.10.1980 from the purview of the Act”

“facilities (both private and government) need access (approach roads/rail) and that invariably pass through the strip of notified forest area along the road/rail line. Since the activity is a non-forestry use of forest land, these require prior approval of Central Government. The requirement of forest land in each case is around 0.05ha. Ministry is of the view that an exemption up to 0.05ha for each such accesses may be allowed to alleviate the hardship of the residents/business owners.”

Environmentalists and citizens have raised the fact that concerns about wildlife getting affected by railways and roads should be better integrated into the proposed changes. The purpose of the Forest Conservation Act is to conserve forests as a primary goal. Due to the high number of wildlife deaths, it is not prudent to exempt roads, railways or public works should not be exempt from the FC Act. It is worth noting that linear projects like railways and highways have serious impacts on wildlife. These impacts are related to direct mortality as well as the spread of invasive species, edge impacts and light and noise pollution. For better synchronization with the goals of the Wildlife protection act, the following points may be kept in mind:

Since the 1980s, several areas proposed for Right of Way may have had forest and vegetation growth. They may be important corridors for wildlife. Construction of infrastructure without consideration of wildlife may lead to human-wildlife conflict.

Linear projects cause direct mortality of wildlife, but they also carry invasive species, and light and noise pollution. They cause ‘edge effects’ in forest areas – negatively impacting ecosystem services like pollination and plant succession.

It is also worth noting that currently, railway lines too do not require EIA. This is despite the fact that they kill so much wildlife. Any amendments to the Forest Conservation Act should in fact address this issue and not further add to the existing lacunae. Linear projects or public works activity in forest land needs to have proper environmental impact assessment and mitigation.

Given that many new roads and railway lines are coming up, the MoEF&CC may also consider conducting cumulative impact assessments of such projects at a landscape level.  The Wildlife Institute of India, an autonomous body under the government of India has suggested that wildlife concerns be mainstreamed for infrastructure development and linear projects be planned to keep wildlife in mind.