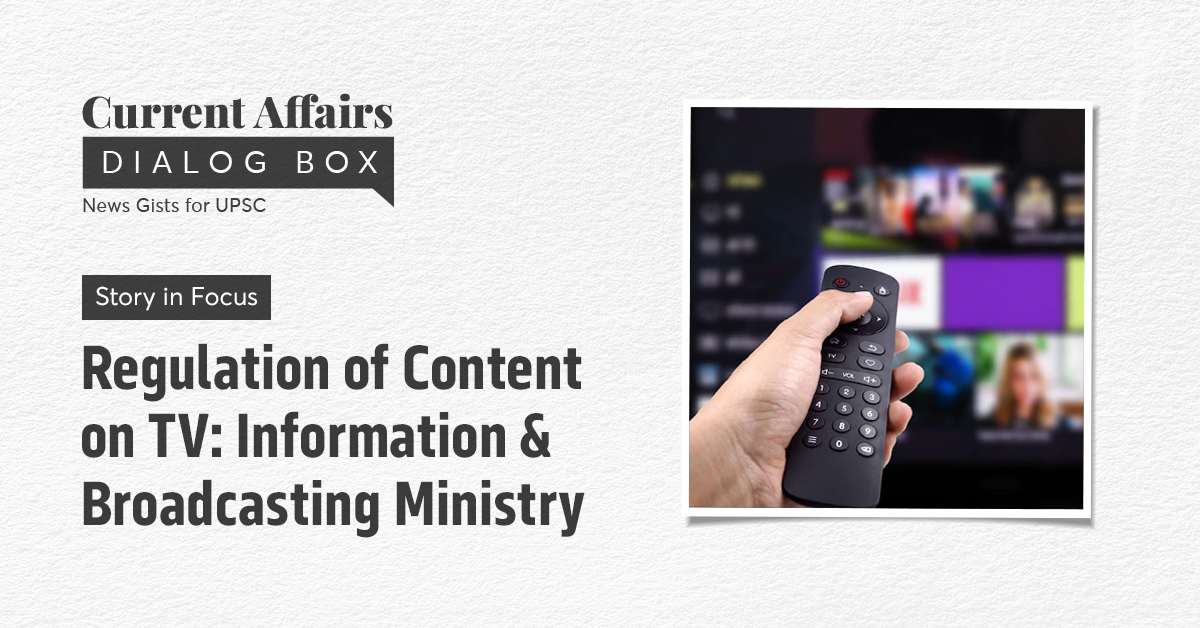 Current Affairs is an integral part of your UPSC exam preparation, and it is imperative to stay updated with the recent events of national and international relevance.

One such topic that was recently in the limelight and crucial from the CSE point of view was the Regulation of Content on TV and OTT platforms.

The Kerala High Court granted a stay to a Malayalam-language news channel on the ban imposed by the Centre.

Regulation of Content on OTT & TV networks needs a balancing act between freedom of expression and issues related to public order, decency and morality. Comment.

● In 2021, The Union government amended the Cable Television Network Rules, 1994.

● The amendment provides a statutory mechanism in the form of The Cable Television Networks (Amendment) Rules, 2021 for redressal of grievances/complaints of citizens.

● Composition of Inter-Departmental Committee: The committee will be headed by the Additional Secretary in the Ministry of Information and Broadcasting and have representatives of other Ministries and organisations, including experts, as the Centre may decide.

○ After examining the complaints, the Inter-Departmental Committee can recommend the Centre to advise, issue a warning, censure, admonish or reprimand a broadcaster, or seek an apology.

The Cable Television Networks (Amendment) Rules, 2021, are significant as it paves the way for a strong institutional system for redressing grievances while placing accountability and responsibility on the broadcasters and their self-regulating bodies.

About Regulation of Movies:

● The Central Board of Film Certification (CBFC) has a mandate to give any film that will be played in a theatre a rating indicating the kind of audience it is suitable for.

○ For example, a movie with sensitive or sexual content would get an adults-only certificate.

● In practice, the CBFC has often suggested changes or cuts to a film before giving it a certification.

● While it isn’t the CBFC’s mandate to censor a film, it can withhold giving a rating unless the filmmaker agrees to its suggestions.

Also, watch a detailed video on Recent changes in Indian Foreign Policy by Ravi Chokkalingam sir, Faculty for Current Affairs, and one of our educators of the UPSC DREAM TEAM:

Regulation of Over the Top (OTT) platforms:

● On February 25, 2021, the Information Technology (Intermediary Guidelines and Digital Media Ethics Code) Rules, 2021, extended its regulatory powers over internet content too, especially on digital news platforms and OTT platforms such as Netflix, Amazon Prime or Hotstar.

● Electronic Media Monitoring Cell tracks channels for any violations of the programming and advertising codes mentioned in the Cable TV Network Rules, 1994.

● There are no specific laws on content allowed or prohibited in print and electronic media, radio, films or OTT platforms.

● The content on any of these platforms has to follow the free speech rules of the country. Article 19(1) of the Constitution, while protecting freedom of speech, also lists certain “reasonable restrictions” including content related to the security of the state, friendly relations with foreign states, public order, decency and morality etc.

● Action can be taken if any of these restrictions are violated.

For more informative articles like this, download the PrepLadder app and get access to well-structured and the most comprehensive study material for Civil Services exam preparation.