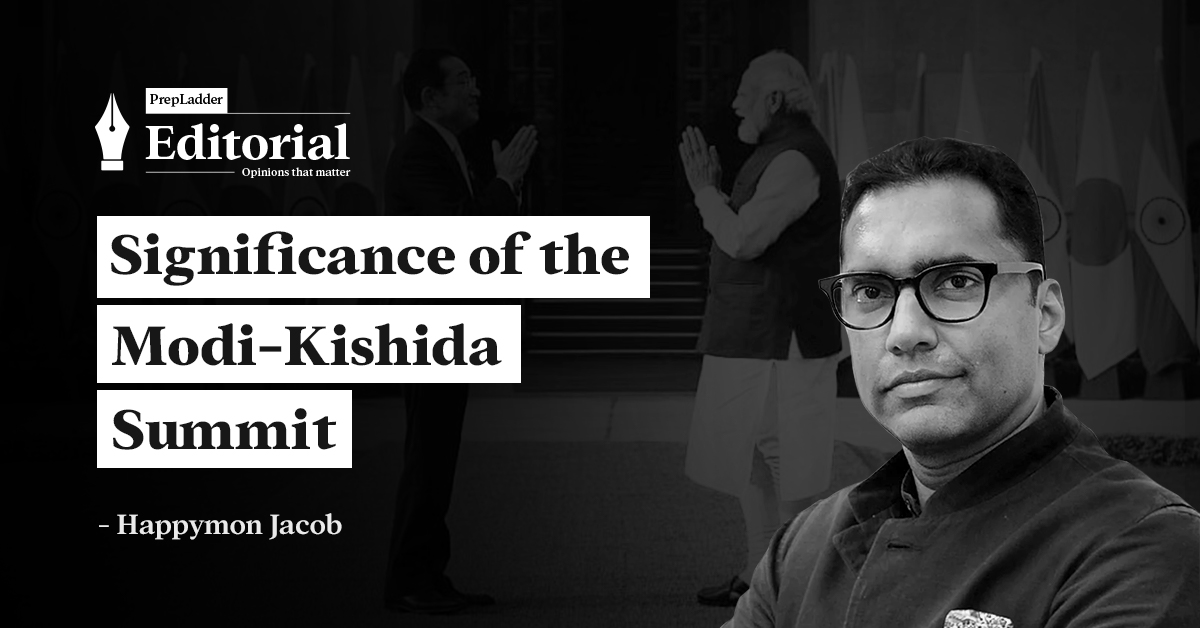 Fumio Kishida made his first visit to India as the Japanese Prime Minister from 19 to 20 March to attend the 14th India-Japan Annual Summit with the Indian Prime Minister Narendra Modi. The two-day visit, happening while most of the world is glued to the unfolding crisis in Ukraine, is of great significance to both the countries and for their partners in the United States and Europe. The last India-Japan summit was held in Tokyo in October 2018, and the three summits were not held due to logistical reasons. Let us briefly review the significance of Kishida’s visit to India and the summit meeting with Modi.

Since India’s refusal to vote against Russian aggression at the United Nations Security Council and the UN General Assembly, there has been a lot of criticism of the Indian stand. That India voted with China, and against its partners such as the US, UK, Japan, Australia etc. had received a great deal of attention in the international media with some people even asking which side of history India is on! There was therefore a desire in New Delhi to explain its position to its partners. As a result, we have been witnessing a number of activities (not all of them initiated by New Delhi though) that India has been part of in the wake of the Russian invasion of Ukraine.

First, we saw the emergency meeting of the quad which discussed Ukraine and agreed that “unilateral changes to the status quo with force like this should not be allowed in the Indo-Pacific region”. During the recent summit meeting between Kishida and Modi, the two sides “emphasized that the contemporary global order has been built on the UN Charter, international law and respect for sovereignty and territorial integrity of states.” The message that India wants to send out is very clear: It is not in favour of the Russian invasion of Ukraine even though it did not vote against Russia at the UN.

Today,(March 21), India and Australia will hold a virtual summit to review the progress on various initiatives under the Comprehensive Strategic Partnership between the two sides. In the run-up to the summit, Australia’s High Commissioner to India Barry O’Farrell made an important statement, to New Delhi’s relief, that “Quad countries have accepted India’s position, each country has a bilateral relationship and it’s clear from the comments of the Ministry of External Affairs and the Prime Minister that he has used his contacts to call for an end of the conflict and no country will be unhappy with that”.

Finally, Quad leaders plan to hold a summit meeting in Japan in May this year. The Russian invasion of Ukraine and its implications for the region are likely to be part of the agenda.

All of the above activities indicate that New Delhi has been trying to send a message to its US and Western partners that it is very much on their side for, unlike China, India can’t be seen as completely pro-Russia, and it needs to sustain its still-growing relationship with the US and the West. It appears that they are starting to see the logic in India’s position.

While Europe and the US are busy..

Modi-Kishida summit is also a clear message from two major non-Western powers that their focus on China, Indo-Pacific, Myanmar, Afghanistan and rule-based order in the region will continue no matter what. The expansive India-Japan joint statement makes that sufficiently evident. More specifically, the summit also underlines that  Ukraine will not distract them from their own strategic priorities which lie in the region. Unlike the US or the West, India and Japan are located in the region and have been at the receiving end of the Chinese aggression in the past.

They have therefore a great deal more stakes in ensuring that the focus on China is not lost. The two sides also have an interest in keeping the conversation going around the Indo-Pacific and the quad. There is a legitimate fear in New Delhi and Tokyo that the current focus of the US/West on Ukraine could potentially make them soft-peddle the challenges from China and put the Indo-Pacific and the Quad on the backburner.

There are also concerns in New Delhi and Tokyo about the continued relevance of the Quad given the feeling in some quarters that AUKUS will perhaps overtake the QUAD. India and Japan are not part of Aukus but the two other QUAD partners, Australia and US (along with the UK), are members of the Aukus. The summit also, therefore, seeks to bring attention back to Quad.

What the Summit Achieved

Seen in the above context, the summit was a success. For one, the summit underlined the fact that despite the change in leadership and India’s position on Ukraine, the relationship is still very strong. Both India and Japan are involved in Quad, Malabar exercises and in a number of key developmental projects within India and across the region.

In the wake of the Covid pandemic and Chinese unilateralism in the region, India, Japan and Australia have been mooting for enhancing the supply chain resilience in the region. In fact, a year ago, the three states had launched the Supply Chain Resilience Initiative (SCRI). In March this year, the SCRI ministerial meeting discussed the importance of identifying key manufacturing and services sectors wherein India, Japan, and Australia could effectively act to enhance the supply chain resilience. This was a major point of discussion during Kishida’s visit to New Delhi. Japan also announced investments worth close to $ 42 billion in India over the next five years.

In short, the visit of the Japanese Prime Minister to India was not only a major success from a bilateral point of view, but, more importantly, it has perhaps indicated the resolve of the two regional powers to keep the focus firmly on the challenges both of them face from within the region. The meeting is also a reminder to the US and the Western powers, who are currently pre-occupied with Russia and Ukraine, that the bigger challenge for everyone is China and therefore the focus on China and the Indo-Pacific cannot be forgotten.