The Impact of the Ukraine War on the Global Nuclear Order 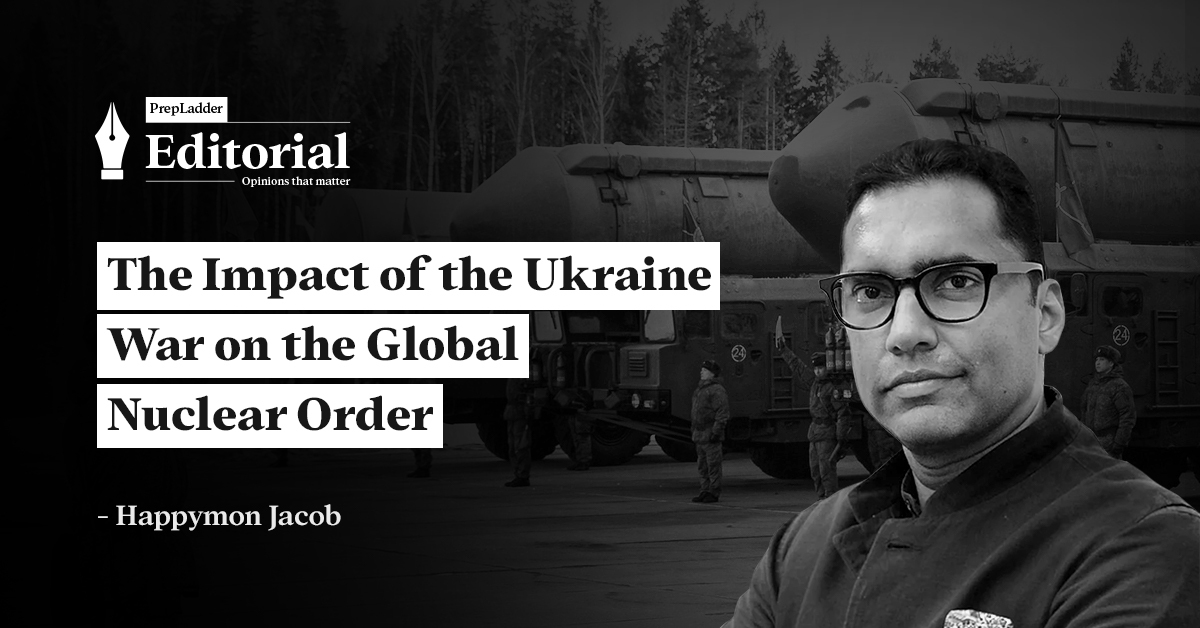 One of the lesser analysed aspects of the Russian war in Ukraine has been the nuclear it implications: what are some of the implications of the Ukraine war on the global nuclear order and the nuclear non-proliferation regime?

The Ukraine context is important. At the end of the Cold War, Ukraine possessed the world’s third-largest nuclear arsenal even though it never had the operational control of those weapons (which was with Russia). Ukraine was disinclined to keep the weapons. So in 1992, Ukraine signed the Lisbon Protocol, and in 1994 it joined the Nuclear Non-Proliferation Treaty as a non-nuclear weapon state. By 2001, all nuclear weapons on its soil were transferred to Russia to be dismantled. In return, Ukraine received a guarantee from states including Russia that it will not be attacked.

In December 1994, the United States of America, the Russian Federation, and the United Kingdom signed the “Memorandum on Security Assurances in connection with Ukraine’s accession to the Treaty on the Non-Proliferation of Nuclear Weapons” or the Budapest Declaration which agreed that they will never attack Ukraine.

Cut to 2022. Ukraine is under attack and invasion from one of the signatories, Russia. The question that analysts and policymakers around the world are asking today is this: Would Russia have invaded Ukraine had the latter not given up on its nuclear weapons? The answer, at least to my mind, is a resounding ‘no’.

The lesson from the Ukraine example is a straightforward one. The value of nuclear deterrence has gone up since the outbreak of the war. Since no nuclear weapon state has ever been invaded by another state, the safe conclusion to draw is that nuclear weapons do provide a certain amount of existential security to those possessing them.

In other words, whatever one might think of the North Korean regime, ‘bad boy’ Kim Jong-un may have been right all along about nuclear weapons. And that Saddam Hussein and Moammar Gadhafi were not ‘bad’ enough – had they developed nuclear weapons, their regimes wouldn’t have been toppled in 2003 and 2011 respectively.

More so, India made the right call in 1998 when it tested nuclear weapons braving the repudiation of the entire world and facing the severe sanctions that followed. So did Pakistan. India was faced with a nuclear-armed China on the one hand and a Pakistan ready with testable nuclear devices. Notwithstanding the occasional Chinese behaviour on the Line of Actual Control, we can be sure today that China will not carry out an all-out attack against a nuclear-armed India with a second-strike capability.

Ukraine’s example is a telling story of how nations must pursue their own security at all costs. In such a self-help world, the best shot at securing oneself is by acquiring nuclear weapons, or at least that appears to be the takeaway from the Ukraine war.

Such a realisation that nukes may provide existential security to weaker powers may prompt a nuclear rethink in many countries faced with stronger adversaries. And who can blame them for thinking so? If so, where does that leave the global non-proliferation regime?

The Ukraine war will undoubtedly (further) weaken the global non-proliferation regime. The NPT-led regime is already shaky. The once-in-five-year NPT review conferences have achieved precious little. No one talks about nuclear disarmament anymore. Non-proliferation, which replaced disarmament, is a failing enterprise. The enthusiasm in global conversations around nuclear security from 2008 to 2016, triggered by the Obama administration in the US, is also a thing of the past.

There will be a special focus on Japan, a country with highly advanced civilian nuclear technologies. Japan faces a serious China threat and there have been calls within Japan in the past to develop nuclear weapons which every Japanese government has so far not heeded to. But what makes the Japanese case unique is that it is a nuclear threshold state possessing the technology to quickly build nuclear weapons if and when it seeks to do so.

Then comes Iran. The renegotiations on the Iran nuclear deal or the Joint Comprehensive Plan of Action (JCPOA), from which the Trump administration withdrew in 2018, don’t seem to be going anywhere. What lessons will Tehran draw from the Ukraine case? Will it conclude that it should push ahead with the nuclear weapons programme?

What about India and Pakistan? Both countries have only the basic nuclear fission or atomic devices, and not fusion devices (also known as hydrogen bombs). Would they consider adding more bombs to their arsenal and testing fusion bombs? So far there is no indication of that, but I wouldn’t be surprised if we hear such demands from New Delhi and Islamabad. In any case, the Ukraine war will strengthen their resolve to never consider disarming their nuclear weapons.

So whichever way you look at it, the “nuclear” lesson from the Ukraine war is a negative one.

Such a global “nuclear weapon renaissance” will lead to many more associated challenges including that of nuclear accidents, nuclear security issues, nuclear terrorism, and nuclear smuggling, among others. The current NPT-led global nuclear order may fall severely short when it comes to dealing with a manifold increase in global nuclear challenges.

However deeply discriminatory the Treaty on the Non-Proliferation of Nuclear Weapons may have been, it did manage to contain the horizontal proliferation of nuclear weapons. Apart from the nuclear five (US, UK, Russia, China and France), there are only four more states with nuclear weapons (India, Pakistan, Israel and North Korea) today. If the message from Ukraine is taken seriously, especially by weaker states faced with stronger adversaries, we may see some rethinking about nuclear weapons and their utility.