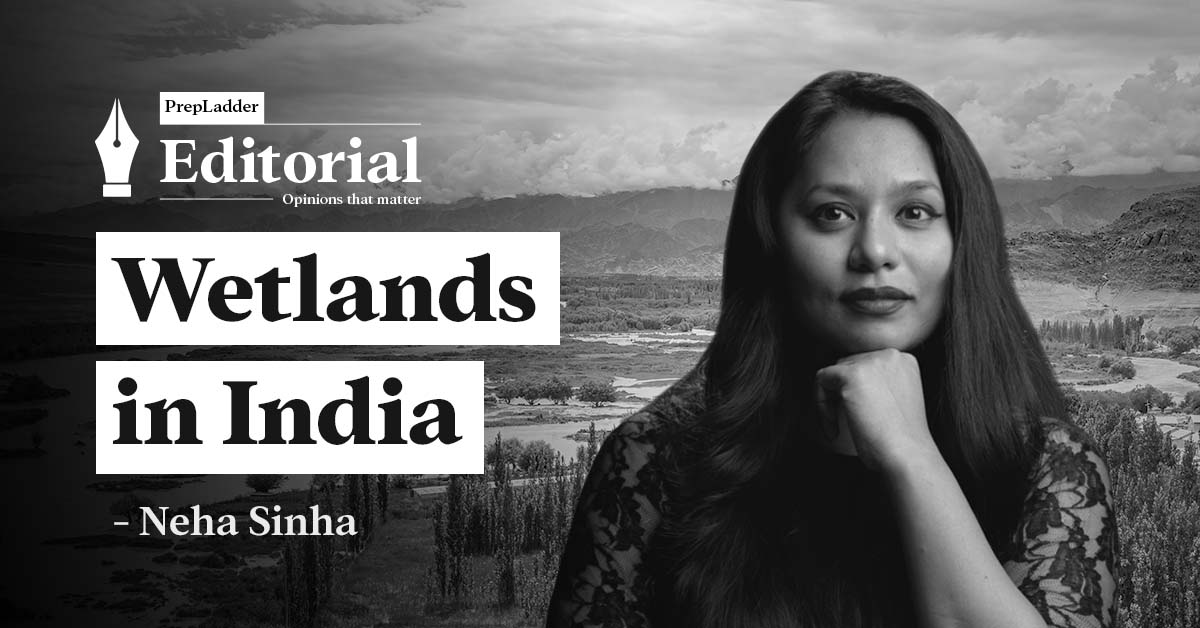 Most of us have grown up near wetlands. Called by different names in India—neher, johad, beel, pukur, talab– wetlands are important for India’s water security, meet drinking water needs, and are biodiversity rich areas. Go to a wetland in the winters in India, and you are likely to see many migratory birds feeding, breeding, resting or foraging, because India is on the ‘Central Asian Flyway’ – an area where millions of birds do a North-to-South migration in winter, mainly to wetlands.

The main legislation for wetlands in India is the Wetland Rules of 2017. The Rules define wetlands as: ‘an area of marsh, fen, peatland or water; whether natural or artificial, permanent or temporary, with water that is static or flowing, fresh, brackish or salt, including areas of marine water the depth of which at low tide does not exceed six meters, but does not include river channels, paddy fields, human-made water bodies/tanks specifically constructed for drinking water purposes and structures specifically constructed for aquaculture, salt production, recreation and irrigation purposes.’ Thus, the following points must be kept in mind for wetlands.

1. They can be areas with temporary water. Many wetlands dry up in hot summer months, and get replenished in other parts of the year through rainfall, streams or riverine sources. A wetland need not ‘look’ like a wetland all year round to be considered so.

3. Wetlands can have still water (that does not move) and also moving water

As per the wetland rules, each state has to have a State Wetlands Authority. There is also a National Wetlands Committee which has to oversee the state wetlands authority. But how are we doing on wetland conservation? One of the conditions of the Wetland Rules 2017 is that only areas identified by the state as wetlands are covered by the Rules. These include wetlands categorised as ‘wetlands of international importance’ under the Ramsar Convention, and wetlands as notified by the Central Government, State Government and Union Territory Administration

Despite their importance, wetlands are generally doing poorly all over the world, constituting one of the most threatened ecosystems today.

Recently, a report on the status of biodiversity and ecosystems was completed by the United Nations led Intergovernmental Science-Policy Platform for Biodiversity and Ecosystem Services (IPBES). The 2019 report finds that 85 percent of wetlands on earth are gone since 1700. Thus, the rate of loss of wetlands is three times that of forests.

In India, progress on conserving wetlands is slow, but happening. The Supreme Court and the National Green Tribunal have directed for wetland conservation many times. In 2017, the Supreme Court in MK Balakrishnan versus Union of India directed for the application of Wetland Rules to 2.01 lakh wetlands in India.

We make it clear and reiterate that in terms of our order dated 8th February, 2017, 2,01,503 wetlands that have been mapped by the Union of India should continue to remain protected on the same principles as were formulated in Rule 4 of the Wetlands (Conservation and Management) Rules, 2010.

While the Wetland Rules were revised in 2017, the Supreme Court order stands. The main challenge is two-fold – one is identifying wetlands (as wetlands, and not land), and the second is saving them from garbage, encroachment or water pollution. Often, wetlands get converted to paddy fields, are drained for housing complexes, or are used as dumping sites for municipal waste (an example is Deepor beel in Assam).

In a new order, the National Green Tribunal has directed that all wetlands need to be considered in district-level planning. In an order delivered on 25/11/2021 in Raja Muzaffar Bhat vs State of Jammu and Kashmir and Others on wetlands, the Court directed that a District Environment Plan in each District would also include wetlands. It further directed that District Magistrates at the District level need to ensure compliance to the Wetland Rules, 2017.

The government of India has also made a first of its kind wetland portal, indianwetlands. in which provides a database of Indian wetlands. With a few hundred wetlands in states, this database is currently incomplete and needs further work. India has lakhs of wetlands. All significant wetlands, wetland clusters (that is small, interconnected wetlands), as well the ‘zone of influence’ or catchment areas of wetlands deserve protection. In recent good news, India has added 4 new Ramsar sites. Ramsar sites are wetlands of international importance – a status that is given when wetlands are conserved and have active management plans. Now, India has 46 Ramsar sites.

May India recognise and conserve all its wetlands!