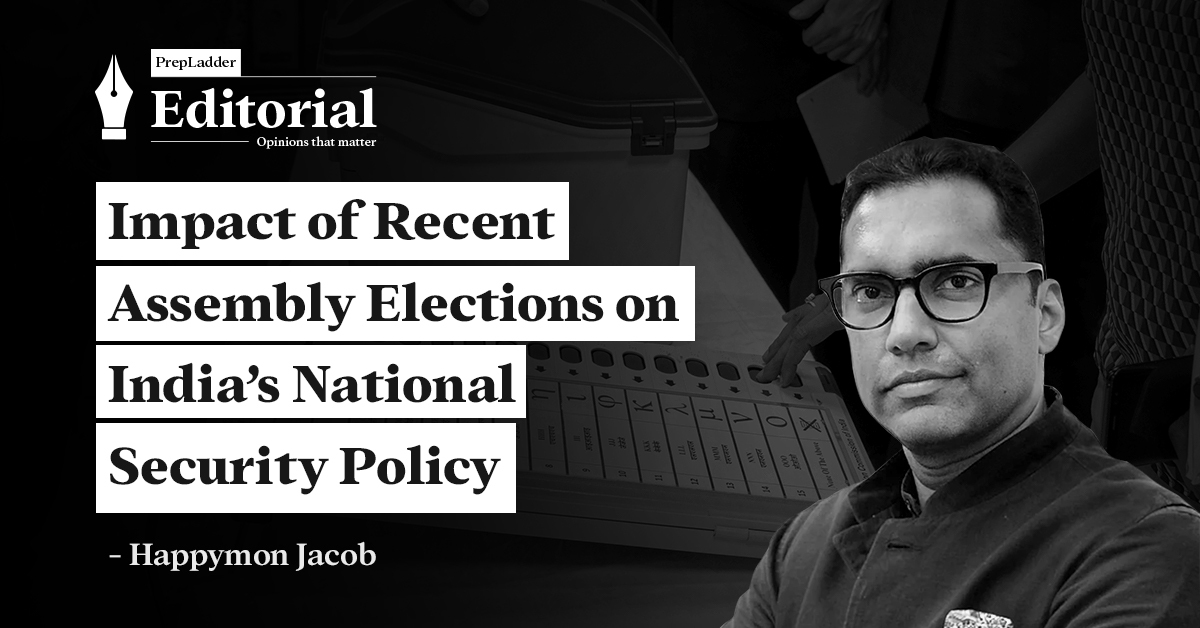 What do BJP’s recent assembly victories mean for India’s national security and foreign policy? Of the five states that went into elections recently, the BJP retained all the four states and the Congress party lost the Punjab elections. AAP’s victory in Punjab or the Congress party’s loss in all the five states may not have much of an impact on India’s foreign and security policies, but BJP’s victories will have significant implications for them.

For sure, the recent electoral victories have further strengthened the central government led by Narendra Modi, with commentators even suggesting that there is no stopping of Modi till 2029. Polemic and speculations apart, this means that the Modi government knows that it has the mandate, and a strong one at that, to pursue its foreign policy goals in a resolute manner.

Whether or not there is thinking within the government to chart a grand strategy for the country is something we can only speculate on; but if it does, this is the time to pursue it without worrying about electoral upsets.

What BJP’s electoral victories emphatically underscore is the fact that China’s aggression did not influence the electoral outcomes. That China is in illegal occupation of Indian territory since the summer of 2020 and that it keeps nibbling at the Indian territory along the Line of Actual Control (LAC) hardly mattered to the Indian electorate, from Manipur through UP to Goa. A cursory glance at the election campaigns also shows that Chinese land grab was hardly a campaign issue during the recent elections.

The message is clear: foreign and security policy hardly matters if domestic issues can evoke more emotional responses than security issues. While this does help the government to take calculated decisions to counter the Chinese aggression without looking over its shoulders, it could also encourage passivity and denial towards the aggression. Whether the government will now increase its efforts at dealing with the Chinese aggression is something we will have to wait and see.

No Rethink on Kashmir Likely

One of the main concerns for the country’s national security establishment today is the situation in Kashmir. Although there is a certain cold peace in the Valley today, there is little doubt that the situation there is far from normal and much of New Delhi’s national security attention, as well as resources, is focused there. That the government’s handling of the Kashmir situation was not an issue in the recent elections also shows that the government can continue with its current policy there no matter the material or reputational costs.

More so, having emphatically made the argument that the withdrawal of the special status and the bifurcation of the state was the right thing to do, the government is unlikely to rethink that position, much less an electorally strengthened one. This could however make peace with sustainable Pakistan more difficult.

On Pakistan, Modi has a Free Hand

Vis-à-vis Pakistan itself, however, a strengthened Modi government has a free hand: to make peace or to continue with the status quo. There appears to be an understanding between the two sides that the current calm on the borders serves both sides well. So the no-peace no-war situation is likely to endure unless something dramatic happens – even the recent missile misfiring by the Indian side did not damage the current calm. So the question is whether the Modi government would be able to chart a new course with Pakistan.

The simple answer is that it can if it wants to. If the current thaw continues, the Modi government stands to gain. And if Modi can create a new opening in the clam but testy relationship, he may have even more support domestically.

India refused to join the Regional Comprehensive Economic Partnership that entered into force earlier this year given its concerns about how this would impact the domestic economy. A government reeling under the fierce resistance from the farmers on the controversial farm laws question was not prepared to sign on to the RCEP. India’s reluctance towards Free Trade Agreements in general also had its roots in domestic pushback and costs.

The recent electoral victories may change that given how the farmers’ agitation had no debilitating effect on the electoral outcomes. Modi government, after having recently signed the India-UAE FTA, was already preparing to finalise several more FTAs. The assembly victories could quicken this process.

The question however is whether the government has the material (read personnel) capacity to do so. Put differently, even a strong government in New Delhi has limited foreign policy capacity to pursue innovative foreign policy goals. This is a result not of domestic elite consensus but a result of institutional weaknesses. So we may see more resoluteness in Modi’s government’s foreign policy from hereon, but we may not see much creativity or, for that matter, action.

Previous Columns: Why India Should Have Mediated Between Ukraine and Russia

One Year of the India-Pakistan Ceasefire